We live in wireless revolution world. Lots of Wireless things we use like Mobiles, WiFi, Bluetooth and more. Even Wireless Keyboards and Mouse are famous around now a days. But most of them run out of batteries. I hate that kind of case. But when i heard Solar Keyboard. Its really quite awesome. Let me share about that here. 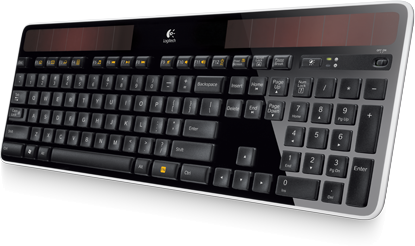 Logitech has come up with the first-ever solar powered wireless keyboard in India. Very slim compared to other wireless keyboards. Logitech K750 wireless solar keyboard gets charged itself whenever there’s light, even when it is used indoors. Small solar panels at the top of the keyboard grab power from any available light source, including fluorescent bulbs. Not only that, the Logitech keyboard stays charged for at least three months in total darkness too.

The Keyboard have two lights on it which determine a simple “GOOD” or “BAD” light situation. The Keyboard comes with extra Software called the Solar App on your computer, Which indiactes the display light leves in the form of lux meter and batter level in percentage. This features is to intimate user to avoid draining the battery. This keyboard is automatically paired with your computer. This keyboard comes with Advanced 2.4 GHz for the best-of-the-best wireless connection, which gives you the reliability of a cord with cordless convenience and freedom. This feature eliminates delays and dropouts even in the busiest wireless environments. In addition, Advanced 2.4 GHz wireless is designed to optimize battery power. Hope this keyboard will get good response in market.