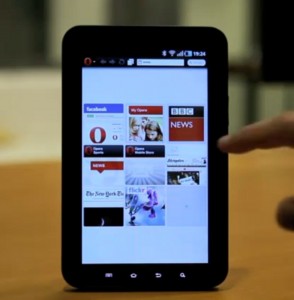 Opera has released a video demonstrating a new browser created specifically for tablet devices. The browser shown is running on an Android device, though Opera will likely release it for other platforms as well.

“This is the first preview of Opera for tablets,” an Opera spokesperson says in the video. “The Opera experience brings smooth panning, and smooth zooming. This is only the first sneak peek.” A browser designed specifically for larger touch screens could indeed make a difference. Currently, browsers with touch interfaces work pretty much the same on mobile phones as they do on tablets.

The timing is impeccable; the first public preview of Opera for tablets will be released at CES 2011 later this week. Large OEMs as well as small companies are planning on announcing a wide assortment of tablets of various shapes and sizes at the show. The tablet market is set to explode this year as Apple’s domination of the market begins to deteriorate amongst the quickly growing competition. Opera has done well as a third party browser for mobile phones, and now it wants to do the same with tablets.