In the game of  online document editors Google plotted their mark with the Google Docs which is more productive to all gmail users to edit their documents online without installing any document editing softwares. By following up Google, Apple also launched iWork, a web versions of their Pages (Document editor), Keynote (Presentation editor) and Numbers (Spreadsheet editor) last year. Microsoft is now in the game for quite time, but its not a huge thing to the people. Now Microsoft made their move by launching their Office.com web apps and it also joins the productivity suite party, a bundles with the collection of small more changes and improvements.

Few days back Microsoft rebranded their SkyDrive to OneDrive, as a move of the rebranding Microsoft launched office.com to compete  with google’s Drive and Docs. Will see whats special in Microsoft Office online and OneDrive.

OneDrive gives you 7GB of default space while you signup and referral bonus of upto 5GB. But you can earn 5GB per person in Copy than any other cloud drive. Comparing the space of the drive, you could prefer Google Drive by getting 15GB free as default space, but no referral bonus available. You can use this drive at onedrive.com

In Office.com you can edit the documents of Word, Powerpoint and Excel and save your documents in OneDrive just like you are currently doing with Google Drive and Docs. I have used the previous edition of office, but this new branding Office.com looks clear and make users to work without any hassle. You can signup for Microsoft account or either you can use your existing Microsoft account to use the Office.com 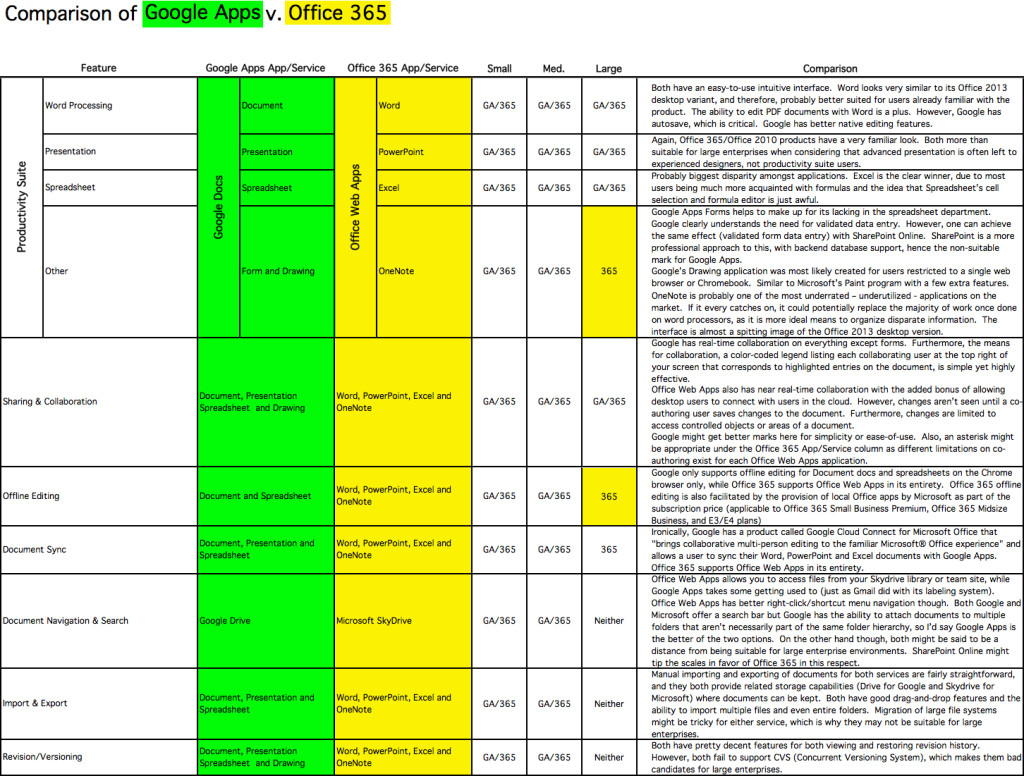 As per the chart office online / 365 leads the Google Docs. Office online GUI is very similar to that of latest version of MS Office.So its very easy to understand the concept and the options available under the office online.

Compatibility, a strong and powerful  thing what the user need. If you want to edit or view the offline document created with MS Office using web app, Office Web app is the apt thing. Compatibility is the only reason which makes the office web app ahead of Google Docs. Office web app doesn’t miss any of the content created with the MS office. You can clearly understand from the image how Google Docs miss some of the layouts which presented in the original document. Hope Google may take this into account and may fixed their compatibility issue until that Office Web App leads the Google Docs.

Similarly lots of things Google Docs failed to display the original content of the document created with MS Office in their viewer.