Samsung Galaxy S3 is one of the top selling smartphones apart from iPhone which has the biggest market share in the smart phone market especially in US. Both have some extraordinary features and attractive design which has helped them to achieve very good popularity among customers from all over the world. This article compares the features of the both phones side by side. 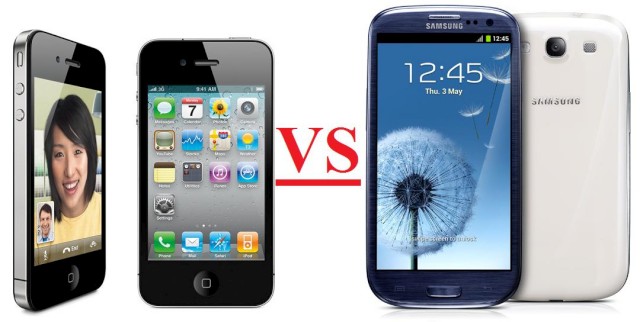 iPhone 4S has the Retina LED display with default resolution of 960 x 640 pixels and screen length of 3.5 inches. The Retina display has very good pixel density and excellent screen clarity. Samsung S3 on the other hand has a Super AMOLED display of 4.8 inches and default resolution of 1280 x 720 pixels. Clearly Samsung S3 has better display that iPhone 4S with amazing clarity and better size. Since Samsung S3 has SAMOLED display, it has better contrast and visibility during day light conditions whereas iPhone 4S has LED display which does not give better visibility under direct sunlight conditions.

iPhone 4S is powered with 1 GHz Dual-core Cortex A5 processor and has 1 GB RAM for smooth and hassle-free performance. Samsung S3 runs with 1.5 GHz Qualcomm Snapdragon Quad-core processor and has 2 GB RAM making it much more powerful that iPhone 4S. In terms of benchmark rating, Samsung S3 has higher score than iPhone 4S in terms of number of transactions processed per second.

iPhone 4S runs with proprietary iOS 5 Operating system while S3 runs on Android 4.0 Ice cream Sandwich. iPhone 4S has its personal voice assistant known as Siri whereas S3 also a similar application but it’s not as effective as Siri.  Samsung S3 has its own custom user-interface known as Touchwiz.

iPhone 4S has only 3G (CDMA/HSPDA) and Edge connectivity whereas Samsung S3 has 4G (HSPA+/LTE)  and 3G connectivity as well. Both have Bluetooth, GPS, DLNA, Mobile Hotspot Tethering and Wi-Fi support as usual. Samsung S3 has NFC (Near field Communication) chipset which allows users to exchange of data at very high speeds with similar NFC enabled phones using software known as S-Beam. Both use micro-USB port for charging and have 3.5 mm audio jack on top.

iPhone 4S is available in 3 different versions namely 16 GB, 32 GB and 64 GB depending on which the price varies. Samsung S3 has internal storage of 16 GB and it can be extended up to 64 GB through external SD cards and this option is not available in iPhone.

In Summary, Galaxy S3 is cheaper and powerful when compared to iPhone 4S in terms of performance, display, camera and other features. iPhone 4S is known for its premium look , elegance and metallic finish which makes it superior to Samsung. People who are fans of Android will definitely choose S3 for plenty of free aps which can be downloaded from Google Play whereas iOS fans will love to purchase iPhone 4S.

This article has been authored by Vishal Shetty, who recommends Pacebutler recycling services, a company buys used cell phones and also donates a book for each cell phone sold to them.