According to statscounter.com, Windows 7 has now punched through the 25% market share barrier, while Windows XP is still continues its slow decline, hitting 50% this month.

Windows 7 recently passed its first birthday in October, where it has already sold over 240 million licenses, with an estimated 300 million before the end of the year. Windows 7 will come pre-installed on 93% of all new PCs. 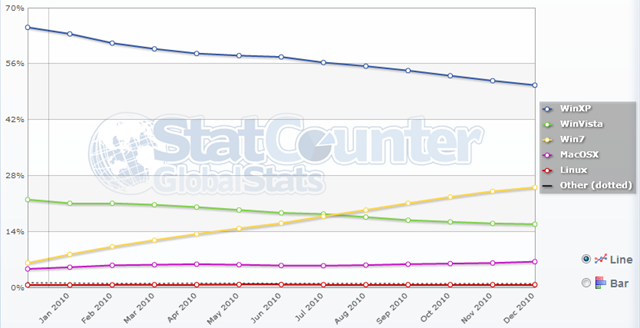 It is estimated that Windows 7 will finally surpass Windows XP around this time next year, considering the projected paths both operating systems are currently on. Microsoft announced in October that Windows 7 has received a 94% satisfaction rate with customers, and 88% of businesses will be moving to Windows 7 in early 2011.