It was only a matter of time, and now it’s finally happened. Facebook has passed Yahoo in traffic to become the third largest website in the world, according to recent numbers from Comscore. Facebook only just surpassed Yahoo, grabbing 648 million visitors compared to 630 million for Yahoo in November 2010, but the overall trend is the impressive part.

The top two spots are still held by Google (970 million worldwide visitors) and Microsoft (869 million worldwide visitors), respectively, though Facebook is rapidly gaining on them. Microsoft has clearly been growing much more steadily in recent months; Google’s traffic seems to be flattening out. Facebook is undoubtedly growing the fastest while Yahoo simply isn’t growing at all. It looks like the top three spots are going to be changing in the next few months. How and when they change might end up shocking some people. 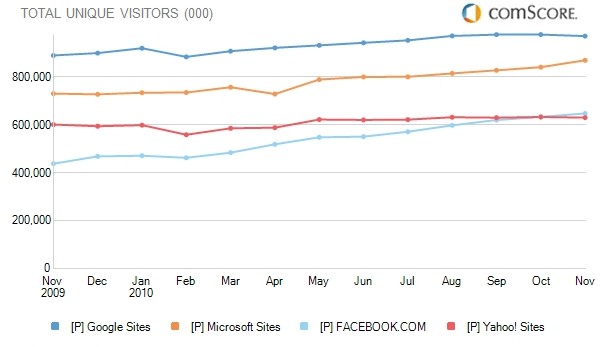