Moto X & Moto G is a Flagship phone manufactured by Motorola Mobility in 2013 after the company acquisition by Google. Moto X first hit the market with the most of the positive reviews. Moto G also a middle end smart phone launched by Motorola which face both the positive and negative reviews from both the press and the blogger group. Even though Moto G have some negative reviews it was advertised as the best budget Phone with Android 4.4 OS. They launched Moto E a lower end smart phone with numerous features with in the Budget which firing the online market and the stores all over the world. 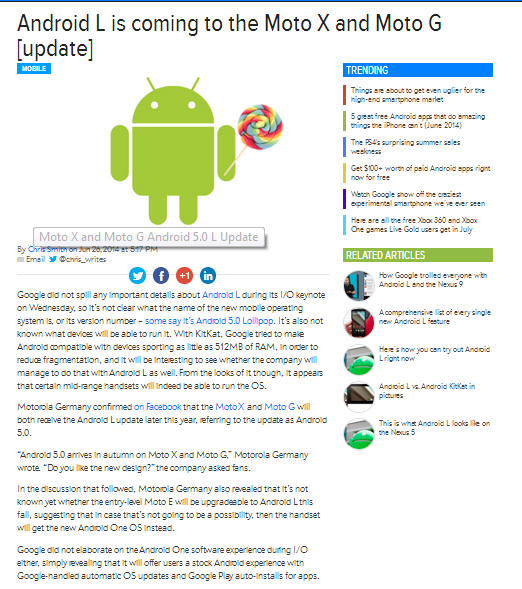 After a day they updated in their Blog that the Germany page was not an motorola’s official page.

While we also had a talk with the Motorola Support via Twitter they confirmed that that is a rumour and the Germany Motorola page mentioned in the blogs were not their authorized Motorola page and they mention that they cant determine the date for the future updates. So its brutally confirmed there is no official announcement from Motorola about the Android L update for Moto G or either Moto X yet. So its not a official website and we should stop worrying about the updates right now. 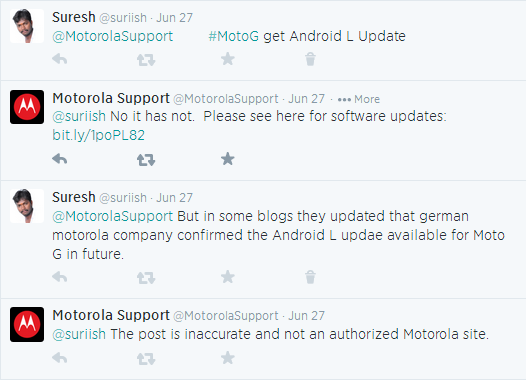 Most of the countries not event get the Android 4.4.3 Update for Moto X and Moto G. Even if Android L is rolled out for Moto X and Moto G, Moto E is considered as low end Moto smart phone so it will not get that update. Check the Official Update available for your Moto phone Here.

It shows anyone can start writing our own stories. If you need to shakeup the globe with your stories? Get your Canadian web hosting and domain registration .ca.